Phil Rogers studied at Swansea College of Art, originally intending to become a painter, but taught himself to pot, learning mainly through reading Bernard Leach and through exposure to the work of leading studio potters.  Has had potteries at Rhayader and now at nearby Cefn Faes Farm in Wales, where he sources local minerals and woods for his glazes. He is the author of numerous books on ceramics, and salt glazing is a speciality. His work has been exhibited at numerous major galleries, and is held in the Victoria and Albert Museum permanent collections; he has toured the U.S., Korea and Japan. 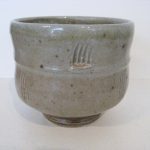