Jim Malone is one of the foremost British studio potters. He studied at Camberwell School of Art, and was taught by Colin Pearson, Ewan Henderson and Ian Godfrey, and is inspired above all by the Korean tradition of ceramics. He has taught at Cardiff, Wrexham, and Cumbria Art Colleges, and has had studios in Llandegla in Wales, Ainstable, Burnby, and Lessonhall in Cumbria, where he pots today. 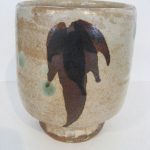 Yunomi with ash glaze and iron and copper foliate design

This rare early Yunomi is from the 1970s, made at his first studio in Llandegla.