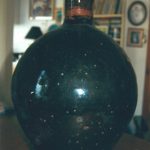 Provenance: from the estate of Bernard Leach to Janet Leach thence to Trevor Corser.