Nataliya Goncharova was born into the Russian intelligentsia and in 1898 was admitted to the Moscow school of painting. It was there that she met with fellow painter Mikhail Larionov with whom she would go on to revolutionise Russian art.

Goncharova designed many costume and set designs, most importantly perhaps for the ballets of Diaghilev, an artistic genius whose ‘Ballets Russes’ captivated Europe. From 1915 both Goncharova and Larionov left Russia to join Diaghilev in Paris, where they became the two leading stage designers for the “Ballets Russes.”

Goncharova died in Paris in 1962 having produced an impressive body of work some of which is represented in the world’s greatest museums and has a reputation as one of the most outstanding figures in the art of the modernist period. 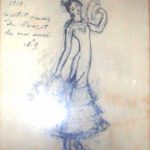 Provenance: inscribed “un souvenir de Paris et de moi aussi”, signed, titled and dated 1916 by the artist. With a letter of authenticity (to be included in the forthcoming catalogue raisonné on the artist).

This charming costume design shows a dancer in Spanish dress with her face turned towards us. It was intended for Diaghilev’s ballet Triana, which never came to fruition.