James Whitney Fosburgh (1910-1978) was an American painter and lecturer on art perhaps most famous for his portrait of US President, John F. Kennedy, which is featured in full colour on the cover of the 5th November 1965 edition of Life magazine, to accompany the memorial essay on the President entitled “A Thousand Days”. Fosburgh was trained at Yale School of Fine Art, where he received his B.A. in 1933 and M.A. in 1935, and was an artist very much at the centre of things in pre- and post-war American society. Although homosexual, he was married to the socialite Mary “Minnie” Cushing, whose first husband had been Vincent Astor.

For his first major one-man show, Time magazine featured the following review: “Ever since the “Ashcan” painters of the early 1900s went looking for Beauty in alleys and gutters, U.S. artists have prided themselves on smoking the lady out of the most unexpected hiding places. Last week in a Manhattan gallery, Painter James Fosburgh smoked her out again. He had discovered her in a dirty clothes hamper, a rumpled pillow, a tavern jukebox. “Anything can be beautiful if you bother to see its beauty,” says Fosburgh. “Even a hamper can be a vision of the world.” He makes a handsome still life from a pair of discarded work gloves or a coffee cup, a romantic landscape from the bleak hangars and dingy flats of La Guardia Airport seen across turgid Flushing Bay.

Fosburgh is a late starter: he is having his first one-man show at 41. After musing through galleries and lecturing for four years at Manhattan’s Frick Museum on everything from Chinese ceramics to Boucher, he finally decided to turn painter. Wartime service as an Army glider pilot held him up for five years. Then he spent another year experimenting with blobs and squiggles: “I didn’t know what I was doing, and finally I decided I wasn’t going to find out, so I chucked the whole lot into the fireplace.”

He decided to model himself on Rembrandt, Goya, Chardin and U.S. Painter Thomas Eakins (“one of the greatest portraitists of all time”): “It was a matter of looking and looking and then working and working.” The small public that buys pictures approved the results: his Manhattan show was a near sell-out” (Time magazine, New York, 28th April 1952).

When the President’s wife, Jacqueline Kennedy, began a project to renovate the White House in 1961, she found, as she wrote, a “crying need for some good American pictures” as there was “really nothing but late nineteenth century Presidents in black.” She called on Fosburgh to serve as the chairman of the committee to select American pictures for the executive mansion, writing to him, “It is my greatest hope to acquire permanently for the White House all the finest from this country’s past. I think it should have pictures by Stuart, Trumbull, Peale, Hicks, Audubon, Sargent, Whistler, Homer, Eakins, Currier & Ives (bedrooms) Mary Cassatt, Remington – and so many others that I am sure you will be able to think of – All the most important periods should be represented – except the really modern ones – as it is a period house – or will be – but we can think of some solution to that.” Fosburgh himself said of his role in this endeavour: “The White House is the setting in which the Presidency of the United States is presented to the world and must be a reflection of the best in American history and art.”

During his lifetime, Fosbburgh had one-man shows at the Kennedy Galleries in New York, amongst others. 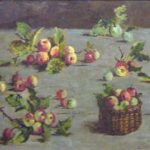