Eugène Carrière was a French Symbolist painter primarily known for his portraits and scenes of motherhood. He was born in Gournay (Seine-et-Marne) and grew up in Strasbourg. Later he moved to Paris, attending the Ecole des Beaux Arts. His family life was a constant source of inspiration to him as this charming and intimate charcoal attests. The woman is shown with head bowed in quiet contemplation absorbed in her task and her interior, wiping a dish that she holds in her left hand. Carrière’s masterful treatment of the most expressive elements of the human form – the face and the hands – is powerfully evoked here, and they emerge from the crescent of bright highlight that sweeps from the woman’s hair down through her shoulder, arm and her hands. The rest of the torso and the lower half of her body are swathed in abstracting darkness, typical of Carrière’s monochromatic style which was mainly concerned, as here with figures modelled by light and shade, allowing the viewer’s eyes to rest on the volumetric forms extended towards us.

Other examples of Carrière’s intimate drawings can be found at the Tate Gallery, London, The National Gallery, London and the Museum of Modern Art in New York. 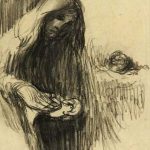 Charcoal on paper recto and verso

Provenance: Stamped with the Estate mark to the reverse