William T. Rawlinson was an official war artist of the Second World War who later became a wood engraver. Albert Garrett in A History of British Wood Engraving (1978) credits him with being ‘the English master of the overall half-tone grey of engraving’.

His style was highly individual. Much of his work was based on natural forms.

He was born in Liverpool in 1912, the son of a schoolmaster. He studied at Liverpool College of Art, and then taught at Liverpool Institute High School. During the war years he served in the RAF in Egypt, North Africa, Sicily and Italy. His war drawings provide a unique record of daily life for those serving. However it was as a wood engraver that, while earning his living as a teacher, Rawlinson gained an international reputation. He was a Gold Medallist in engraving at the 1960 Paris Salon and became a member of the Society of Wood Engravers in 1972. His work as an official war artist is held by the Imperial War Museum and at the RAF Museum in Hendon. 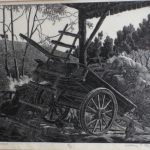 signed, titled, dated and numbered from the edition of 50 (12) 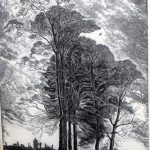 signed, titled, dated and numbered from the edition of 50 (24)