William Scott was a painter of Irish and Scottish descent. Much of his childhood was spent in Scotland and from 1924 at Enniskillen, Co. Fermanagh. His Irish father was a house- and sign-painter and arranged for his son to take lessons from an art teacher at Enniskillen. He completed his studies from 1928 to 1931 at Belfast College of Art and from 1931 to 1935 at the Royal Academy Schools in London.

In 1937 Scott spent six months in Italy and then moved to France, living mainly at Pont-Aven, where he helped to run a painting school. His works of this period included landscapes, still-lifes and studies.

At the beginning of World War II, Scott returned to London and from there moved in 1941 to Somerset. While serving in the army from 1942 to 1946 he made only a few watercolours of soldiers and the local landscape. He returned to painting in earnest in 1946, concentrating in works such as The Frying Pan (London, 1946; London, AC Eng) on still-lifes of pots and saucepans, eggs, fishes and bottles on a bare kitchen table. Although this theme reflected the austere conditions of his childhood, he chose these objects simply because they provided contrasting shapes that he could arrange against simple backgrounds.

This phase of Scott’s work came to an end partly as a result of a visit in 1953 to the USA, where he met Pollock, Rothko and Kline. He admired their work but felt that he belonged to the European tradition of Chardin, Cézanne and Bonnard, and this led to a gradual return to a more representational style. Gradually, however, he moved again towards abstraction, turning pots and pans into irregular oblong or lozenge shapes, distributed laterally in groups across the picture surface and keyed to a particular colour, as in Ochre Still-life (Ochre Painting) (1958; London, Tate).

Scott’s work on a huge mural for Altnagelvin Hospital in Londonderry (1958–61) led him increasingly to simplify his forms in large-scale, completely abstract easel paintings such as Berlin Blues 6 (1966; London, AC Eng), in which irregular squares and lozenges are flatly painted in separate tiers. In the late 1960s, for example in Grey Still-life (1969; Edinburgh, N.G. Mod. A.), he reintroduced objects such as frying pans and saucepans juxtaposed with purely abstract forms; the picture space was kept deliberately flat and the forms carefully spaced in floating rows. In both paintings and prints he sometimes produced variations of almost identical arrangements of forms in completely different colours, continuing to use still-life subjects as the starting-point for otherwise self-sufficient formal relationships. 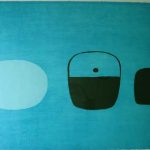 Signed and numbered from the edition of 40

One of William Scott’s very finest prints, unsurpassed in its intensity of colour and purity of form, and highly scarce, being produced in such a small edition. Scott spoke of the post-War period, in which he reached artistic maturity, as ‘a world without colour’: his luminous use of colour is thus a reaction to such austerity, and the three lithographs that form Summer Suite mark a climax in his interest in pure colour. Green Predominating is an important work too in the stylisation of its forms, which hover between representation and abstraction, creating a still life charged with ambiguity. These forms are animated by their delicate counterpointing of light and dark, of solid and outline, and by their subtle modifications of the ellipse.

Scott is a master of intuitive arrangement, yet his positioning is always underpinned by his understanding of Classical geometry. Here the golden section provides the structure, both vertically (marked by the divide between light and dark forms) and horizontally (marked by the divide in the middle form), whilst the sliver of blue at the top, providing a minimal horizon, adds to the impression of harmony, and increases the sense of projection.

Examples of this print are held in the Tate and in the Government’s Downing Street Art Collection. 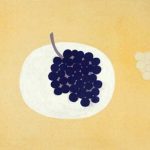 signed, dated and numbered from the edition of 150

The full sheet printed to the edges, in fine condition