William Palmer Robins began his professional career as a student of Architecture. However, after two years of training he decided that his calling was as an artist. He attended St. Martins School of Art and eventually became an instructor there, staying at the college until 1909. During the twenty years spent at St. Martins, he produced many of his major works, finding both his vocation and style as a painter-etcher. In 1911 he became an Associate of the Royal Society of Painter Etchers and Engravers.

His technique was close to that of Seymour Haden and James Whistler, etching directly from nature onto pre-prepared plates. In 1922 he wrote and published Etching Craft: a guide for students and collectors. His work is held in numerous public collections and a large number of etchings are held in the collection of Newcastle University. There was an exhibition titled Whistler, Haden and the Rise of the painter-etcher featuring examples of his etched work held at the Hatton Gallery, Newcastle in 2001.

A very fresh example of a proof etching by W.P Robins, showing a typical rural landscape with a large weeping willow in the foreground, hanging over a pool, framing fields with grazing cattle in the distance. William Palmer Robins was born in Southwark, London in 1882. His father, who was an art teacher nurtured his early interest in the arts. Both father and son shared a passion for the countryside and both spent many hours sketching together and this theme was to become intrinsic his work. 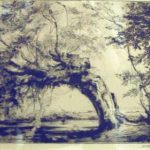 signed by the artist in pencil, inscribed ‘Trial proof’

annotated on the reverse to retained section of earlier board “(Trial Proof V. Before the plate was cut and before punt and man were added below tree at left.)” Titled and dated.