Victor Pasmore was born in Chelsam, Surrey, where he spent his childhood and studied at Harrow. From 1927 he attended evening classes at the Central School, studying under A.S. Hartrick. In 1932 he was elected a member of the London Artists Association which sponsered his first exhibition at the Cooling Gallery in 1933, and through which he met William Coldstream. Indeed, he later went on to found, along with Coldstream and Claude Rogers, the Euston Road School. From the late 1940s, Pasmore devoted himself to painting and abstraction, with the support of Kenneth Clark. His first solo show was held at the Wildenstein Gallery in 1940. From the early 1950s he visited St. Ives, where he was encouraged by Ben Nicholson and became associated with the constructivist group that included Hill, Adams, Heath and Martins, organising exhibitions with them at the AIA Gallery, Redfern Gallery and Gimpel Fils. In 1954 he was appointed Director of Painting at the University of Newcastle and began a project that was to last over 20 years designing the layout and architecture of the new town of Peterlee. In 1966, Pasmore moved to Malta to concentrate on painting. Throughout the 1960s, Pasmore continued to exhibit widely and retrospectives of his work were held at the Tate Gallery in 1965 and 1980.

For an ecology of the mind

Etching and aquatint on wove paper

one of 20 proofs outside of standard edition of 90 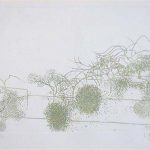 etching with aquatint printed in green, on wove paper

signed with monogram, dated and numbered from edition of 55, by the artist in pencil.

The print shows the gardens at Hammersmith. The present etching refers to natural forms but also attests to Pasmore’s lifelong interest in Japanese art. 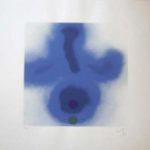 signed and numbered from the edition of 70 by the artist in pencil.

Printed at Kelpra Studio and Published by Marlborough Graphics.