Tom Phillips was born in London in 1937. He read English at Oxford and at the same time studied drawing at the Ruskin School. In 1961 he went on to Camberwell School of Art. Phillips won first prize at The John Moores Liverpool Exhibition in 1969 and subsequently went on to exhibit in many solo and group exhibitions around the world. In 1993 a major exhibition of his work was held at the Royal Academy of Arts and, to mark his sixtieth birthday in 1997, retrospectives of his work were held at the Dulwich Picture Gallery. Phillips was elected to the Royal Academy of Arts in 1989 and was Chairman of the Royal Academy’s Exhibitions Committee from 1995 to 2007. 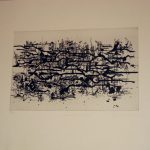 signed and numbered 7/100 by the artist in pencil