Eric Ravilious married his wife Tirzah in 1930. She was born in Eastbourne in 1908 and studied at the Eastbourne School of Art where she met Ravilious who taught her wood engraving. The Raviliouses moved to Great Bardfield in Essex and for a while shared a house with Edward Bawden and his wife Charlotte. She gave up her career for motherhood (they had three children), but she started work again after Eric’s death, even though she was already suffering from the cancer that caused her own early death.

Examples of her work are held in the British Council collection and Victoria & Albert Museum, London. 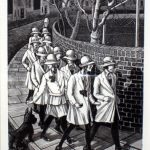 numbered from the edition of 500

The Crocodile shows a group of chattering schoolgirls walking in crocodile. It was originally titled The Daughter and was commissioned by Oliver Simon for a projected but never completed series called “The Relations”, a calendar to be published by the Curwen press. It was exhibited at the 10th Annual Exhibition of the Society of Wood engravers in November 1929 and was published in the London Mercury of March 1930.