English painter and printmaker. From 1962 to 1967 Stephen Buckley studied at the University of Newcastle upon Tyne under Richard Hamilton, also benefiting from contact with visiting tutors such as Pop artists Richard Smith (for whom he later worked as an assistant), Joe Tilson and Eduardo Paolozzi. While still a student, Buckley began to present his paintings as physical objects, constructed and then decorated. Often Buckley drew upon the everyday environment: in the early work by referring to crazy pavings, tartan patterns and prosaic interiors, and in the later work by alluding to more specific architectural details and by using everyday materials as constructional elements. He not only painted with brushes on stretched canvas but also worked with processes such as tearing, folding, stitching, stapling, patching, screwing together, nailing and weaving. Along with traditional artists’ materials, he used house paint, shoe polish, liquid linoleum, perspex, carpeting and old clothes. Often admired for the breadth of his reference to other 20th-century art, Buckley, like his friend Howard Hodgkin, used the abstraction of simple marks and bold design to convey specific moods and circumstances. 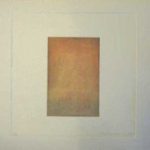 the full sheet with deckled edges, in fine condition.