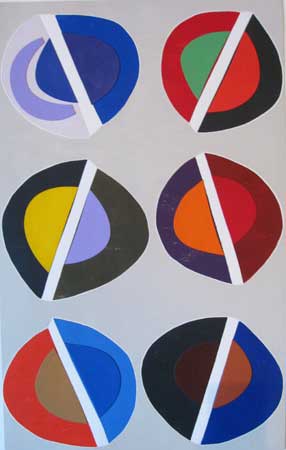 signed, dated and inscribed to the reverse.

Printer’s proof aside from edition of 40

Example in the British Council collection.

‘Halzephron’ is from a series of eight collaged woodcuts, printed by Hugh Stoneman and individually collaged by the artist; the series became renowned as the artist’s most ambitious print project. The work combines Frost’s characteristic exuberance of form and colour with a subtle counterpointing of textures: of projected collage with embossed print, and of flat colour with the linear grains of the woodblock. Mel Gooding has described ‘the arrangement of the individual split motifs’ as ‘a kind of synaesthetic notation, as musical as it is visual’. The title refers to a stretch of the Cornish coast on the Lizard, whose soaring cliffs are the inspiration behind this swirling of the senses.