Sir Frank William Brangwyn was one of the most influential etchers of the twentieth century. He was born in Bruges, Belgium to English parents and was educated in England. He trained at the Royal College of Art and was apprenticeed to William Morris in 1882, when he made his name as an accomplished etcher and lithographer. By 1926 he had completed 331 original etchings. Most of his subjects were figure studies, architectural and marine scenes. He travelled widely and many of his most famous scenes are etchings of continental views, particularly from France, Belgium and Italy. During his lifetime he had a variety of commissions to produce large scale murals for public spaces, including one for the House of Commons, London. Brangwyn went on to become an official war artist during the First World War and he was the first artist to be given a retrospective at the Royal Academy, during his lifetime. His etchings are renowned for their tonal quality and are highly sought-after. His work is held in numerous public collections both in England and abroad. 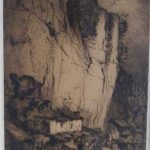 On the road to Figeac (Sur La Route de Figeac)

signed by the artist in pencil

The plate was etched on the spot. Figeac lies on the right bank of the river Cebe at the eastern side of the Massif Central, 80 miles above Toulouse. It was originally a monastery, founded by Pepin le Bref in 755.