The British sculptor, collagist, printmaker, film maker and writer was born of Italian parents in Edinburgh, Scotland. He attended the Edinburgh College of Art in 1943 and from 1944-47 studied at the Slade School of Art in London. He then moved to Paris, where he stayed until 1949, meeting artists such as Arp, Braque, Brancusi, Giacometti, Jean Hélion, Léger and Tristan Tzara. It was there that he became interested in Surrealist art. He later became professor at the St. Martin’s School of Art and also taught in Germany and at the University of California in Berkeley. His work as a sculptor and print-maker is of major importance and often reveals his interest in modern machinery. 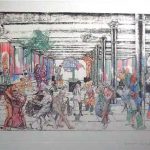 signed and numbered 29/50 by the artist in pencil

Published by the Royal College of Art in 1992. 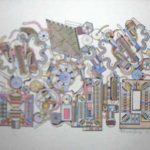 signed, dated 1999 and numbered I/XX by the artist in pencil