Sir Anthony Caro studied at the Royal Academy Schools, London and during 1951-1953 he worked as assistant to Henry Moore. Woman Waking (1959; Tate, London) exemplifies Caro’s work of the 1950s when he modelled figural works in an expressionist manner. By the end of the decade, Caro had begun experimenting with a wider variety of materials. From 1953 he worked part-time at St. Martin’s School of Art, London. In the early 1960s, Caro began welding metal into abstract configurations, which were then unified by being painted in a single primary colour. Although these open form sculptures placed directly on the ground were primarily abstract in conception, they still related to the figure through their gestures or their allusions to the movement of the body, and through their scale. They soon adopted a predominantly horizontal axis, a lyricism of mood and a light open arrangement of cantilevered planes and lines as in Early One Morning (1962; London, Tate; see fig.). Negating the weight and appearance of his material, Caro made sculpture that seemed almost to hover above the ground, touching it lightly at several discrete points. Caro received his first solo show at the Whitechapel Art Gallery in London, which garnered his work considerable critical attention. He was soon recognised as a major figure for his role in re-positioning the mainstream of modernist British sculpture into an abstract constructed mode. The previous decade had been dominated by the monumental sculpture of Moore, and by the so-called ‘Geometry of Fear’, eviscerated figurative sculpture by artists such as Reg Butler and Lynn Chadwick. Caro’s sculpture from the 1950s and 1960s can be said to have created a new school in its wake. 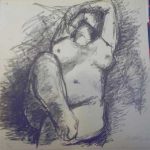 the full sheet printed to the edges

Published by the Royal College of Art in 1987.