Sandra Blow studied at St Martin’s School of art in the 1940s, then at the Academy of Fine Arts in Rome. In Italy she became both the student and lover of Alberto Burri, and his use of unconventional ‘found’ materials and collage had a lasting effect on her work. In the 1950s she worked for a time in St Ives, and became a close friend of Roger Hilton. She returned to St Ives from London in the nineties, painting from an enormous studio at the top of the town with views out over the bay. Her work tempers geometry with organic forms and a spontaneous sense of improvisation; she has stated her aim as being a dialogue with nature. 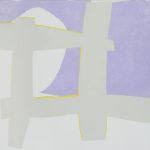 Screenprint in colours on wove

signed and inscribed ‘A Gift For’ by the artist in pencil

a proof aside from the edition of 100

the full sheet with margins and deckled edges in fine condition. 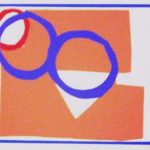 signed and numbered 1/XX by the artist in pencil

the full sheet with margins and deckled edges in fine condition.