Ruskin Spear was born in Hammersmith in 1911. He won a scholarship to Hammersmith School of Art and then another in 1931 to the Royal College of Art, where he studied under Gilbert Spencer amongst others. Some of the artist’s early work was shown together with Carel Weight’s at the Picture Hire Gallery. Spear first exhibited at the Royal Academy in 1932 and was elected a full member in 1954. He taught at the RCA from 1948 to 1975. His work features in a number of major collections, including the Tate Gallery.

But perhaps Ruskin Spear’s most typical expression of his warmth of feeling, his powers of observation and his deep, if detached, understanding of humanity and the environment in which he has lived and worked all his life, are to be found in his studies of the ordinary people of West London going about their business, or captured in unguarded moments of relaxation. The streets and pubs and snooker halls of Hammersmith, Chiswick, Shepherd’s Bush, Fulham and Putney are the areas he knows and loves. The Hampshire Hog in King Street and the Ravenscourt Arms, both in Hammersmith, have always been for the artist the epitome of all the ‘local’ means to its regulars. Snug and happy, gregarious or sometimes lonely, they provide for a while a safe world of mahogany and brass, a stage lit by the glitter and sparkle of glasses and bottles repeated to infinity in the frosted engraved mirrors. This is the Olympus of the working-man. The décor is often dull: browns, dark reds and greens; some areas lit, some in shadow. Pools of light and dark hold the habitués like fish, clutching their pints and nibbling at cigarette butts. The low tones of many of Ruskin Spear’s pub pictures recall some of Sickert’s paintings of the Old and the New Bedford Music halls.’ Mervyn Levy, Ruskin Spear, Weidenfeld & Nicholson, 1985. 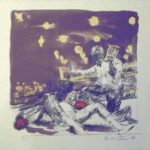 Out for the Count