Roy Walker who died in 2001 was born in Kent in 1936. After studying at the Royal Polytechnic and Gravesend School of Art he joined the RAF as part of his national service. This experience was clearly an early influence on him as many of his later works study the theme of flight.

After completing his National Service Roy attended the Central School of Art in London and then after a period of time in Essex he moved to St Ives, Cornwallwhere he lived and worked for the rest of his life.

Roy made huge contributions to the arts in Cornwall and particularly St Ives where he achieved an impressive reputation as a painter and printmaker in addition to becoming director of the print workshop in Penwith Galleries. Roy was also an active and highly respected member of the Newlyn and Penwith Societies of Artists and was a close friend of the artist Bryan Pearce whom he assisted with the production of his etchings.

Examples of his work are held in the British Council collection and Victoria & Albert Museum, London. 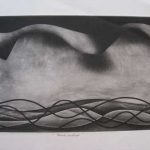 signed, titled and numbered from edition of 40 by the artist in pencil

the full sheet with margins

signed, titled and numbered from edition of 40 by the artist in pencil

the full sheet with margins