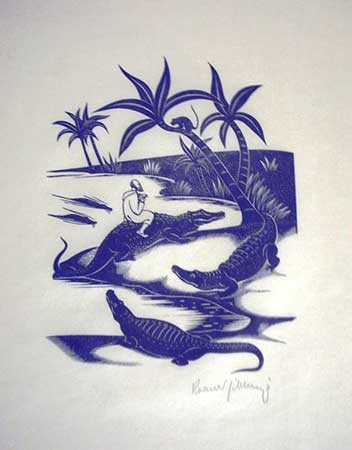 Wood engraving for Beasts and Saints by Helen Waddell (1934)

Wood engraving on paper, signed by the artist

A striking wood engraving from 1934 to illustrate Helen Waddell’s book Beasts and Saints which was a collection of stories and folk tales on the theme of ‘the mutual charities between saints and beasts’ dating from the fourth to the twelfth centuries and translated from the Latin by Waddell. Gibbings was particularly satisfied with his work for the book, recalling ‘My engravings in these two books were the best that I had so far accomplished, and gradually the sadness I felt at losing my press was dissipated.’ (Robert Gibbings, Some Recollections, from Patience Empson, The Wood-engravings of Robert Gibbings, 1949: xlii).