Robert Adams was one of the most prominent post-war British abstract artists alongside Victor Pasmore, Kenneth and Mary Martin, Adrian Heath, Roger Hilton, Terry Frost, Anthony Hill and William Scott. In 1949 Adams began teaching at the Central School of Art and Design in London, where he came into contact with Victor Pasmore and his circle, which acted as a forum for Constructivist ideas in Britain; Adams exhibited with them from 1951 to 1956, working mainly in metal sculpture. Unlike the rest of the group, however, he rejected both mathematical formulae and new materials in sculpture. Many of his works were in wood and were based on organic forms. He was nevertheless sympathetic to the group’s aim of forging a link between art and architecture.

While teaching at the Central School Adams learnt how to weld and in 1955 began to produce constructions of sheet and rod elements, as in ‘Tall Spike Forms’, which showed the influence of González and a move towards non-figuration. His work of the 1960s often used welded steel sheets, sometimes perforated, as in Large Screen Form (1962; London, Tate). These were ideally to be displayed against a well-lit background so as to allow light to shine through – one can clearly trace the influence of such works on this screenprint. Though he never lived in Cornwall, he visited and enjoyed good relations with many of the contemporary St Ives artists, sharing with many of them a provisional approach to Constructivism. He contributed to the ‘Penwith Portfolio’ of 1973 to raise funds for the Penwith Galleries. 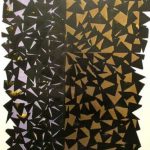 An example of this print is held in the Tate Collection.