English sculptor, photographer and painter. Within a year of his departure from St Martin’s School of Art, London, Richard Long was closely associated with the emergence of a new art form, Land art. Long made his international reputation during the 1970s with sculptures made as the result of epic walks, sometimes lasting many days, to remote parts of the world. Guided by a great respect for nature and by the formal structure of basic shapes, especially circles, he never allowed facile exotic connotations to intrude into his work. Long distinguished himself from American land artists by the lightness of his interventions on the ground; he saw this both as an ethical principle, in refusing to despoil or exploit the landscape, and as an aesthetic one. With Long’s works, the spectator, is confronted with the idea of the walk, not with the artist’s experience itself, but with the indirect evidence of it. 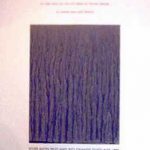 signed by the artist and inscribed G.S.L. archive (Printer’s archive example) in addition to the edition of 100