Born in Braintree, Essex, in 1936, Richard Bawden attended the Royal College of Art. He works in a wide variety of media, including etching, linocut, watercolour, illustration, poster design, murals and mosaic work.

He lives and works in East Anglia and the themes in his work include both domestic interiors and the natural world of the garden beyond his doors. He is a member of the Royal Society of Painter-Printmakers and of the Society of Designer-Craftsmen. He exhibits regularly at the Royal Academy Summer Exhibitions and his works are in a number of notable public collections, including the Tate Gallery, The Queen’s Collection at Windsor and the Ashmolean Museum. 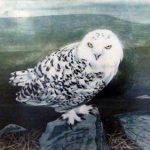 signed, titled and numbered from the edition of 75 by the artist in pencil