Rachel Reckitt was born in St Albans, Hertfordshire. She studied at the Grosvenor School of Modern Art in late 1930s under lain Macnab, and in 1970-5 at the Roadwater Smithy, Somerset, with Harry and Jim Horrobin. After training Reckitt worked from home in west Somerset at Rodhuish, Minehead. She carried out commissions for pub signs; wood-engraved book illustrations and single prints; and did sculpture in five Somerset churches and for private commission. She was an honorary member of the Somerset Guild of Craftsmen and SWE and a member of British Artist Blacksmiths’ Association. Other group shows included those at Wertheim Gallery and LG. She also held solo exhibitions at Duncan Campbell Contemporary Art and Bridgwater Arts Centre. Public collections in Salford and Bridgwater hold examples of her work, as do Withycombe, Old Cleeve and Leighland.

In 1950 the publisher Paul Elek commissioned Rachel Reckitt to engrave sixteen full-page illustrations for an edition of George Eliot’s The Mill on the Floss. The blocks were to be Rachel’s finest illustrative work, but Elek went into receivership and tragically the illustrations were never published, although Reckitt did print small editions of each image from the blocks. The artist’s proof examples of the illustrations were only exhibited publicly for the first time in 1997, and shortly after this the original blocks were rediscovered and a book illustrating all sixteen of her engravings for The Mill on the Floss was finally published in 2010.

Rare examples of wood engravings for the unpublished illustrations for George Eliot’s The Mill on the Floss. 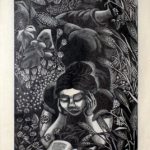 “The Mill on the Floss” (9) Maggie reading in the fields

signed titled and numbered from the edition of 6 (2) 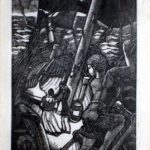 signed titled and numbered from the edition of 6 (3)