Patrick Procktor was born in Dublin in 1936. After the death of his father in 1940 he was brought up in London and Brighton by his mother and maternal grandparents. He attended Highgate School (whose art master was the Welsh landscapist Kyffin Williams, RA). In 1958 Patrick Procktor attended the Slade, where he was influenced by William Coldstream, Keith Vaughan, William Townsend, Claude Rogers, Robert Medley and others, developing his painting style in the dark, figurative tradition then prevailing. After graduating from the Slade in 1962 he travelled to Italy and Greece, travels which formed the basis of his first exhibition at the Redfern Gallery the following year. All of the paintings sold prior to the opening. Overseas exhibitions have included New York (1968), the Galleria del Cavallino in Venice (1972 and 1986), the Galerie Biedermann in Munich (1976, 1989 and 1992), the IAM Galleria, Lisbon and Le Cadre Gallery, Hong Kong (1987 and 1993), Galleria Ghelfi (1990), Galerie Coard, Paris (1992) and Tokyo Art Fair/Galerie Enatsu (1992). Numerous exhibitions of Procktor’s work have been held at the Redfern Gallery, London. His work is held in many major public collections, including The Arts Council of Great Britain, The Contemporary Arts Society, The Imperial War Museum (London) and Los Angeles County Museum. 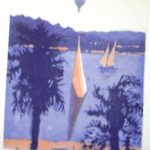 signed, titled and numbered 60/75 by the artist in red pen

£420 (framed with the accompanying book below)