Patrick Caulfield was born in London in 1936. He studied at the Chelsea School of Art from 1956 to 1960 and returned there to teach from 1963 to 1971. The three years he spent at the Royal College of Art were a major turning point in Caulfield’s artistic career. While there, he studied with Hockney, Kitaj and Jones who were one year his senior. His work was subsequently chosen for the Young Contemporaries exhibition in 1961 and he came to be seen as one of the third generation of Pop painters. His work in fact had little in common with that of his contemporaries and was closer to the European tradition of ‘modernising’ subject matter. Using house paint he created smooth almost banal surfaces for his seemingly banal subjects drawn from everyday life to increase the sense of irony in his work. He has always had a firm reputation for printmaking as well as painting and won the Prix des Jeunes artistes for his prints in 1965. Caulfield went on to teach at the Chelsea School of Art. A monograph on him was published in 1971 and a retrospective was held at the Tate Gallery and the Walker Art Gallery in Liverpool in 1981. 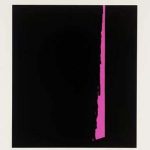 Curtains drawn back from balconies of shores

Signed and numbered from edition of 100

A screenprint for the book ‘Some poems of Jules Laforgue with images by Patrick Caulfield’, printed by The Petersburg Press in 1973.

The print is from Edition C (with margins and signed on the front) which had only 100 prints. 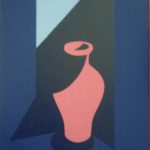 Autographic screenprint printed in 4 colours on Velin B.F.K Rives paper signed and numbered 1/XX by the artist in pencil one of 20 artists’ proofs aside from the standard edition of 100 the full sheet, printed in colours to the deckled edges