Ackroyd has taught at Winchester College of Art and Central School of Art. The recipient of a number of awards, Ackroyd was been described by the Financial Times Art critic, William Packer, as ‘by far our most adventurous and accomplished etcher’. He has held several dozen solo shows and his work is represented in the British Museum, London; the Tate Gallery, London; Museum of Modern Art, New York; National Gallery, Washington DC; Victoria and Albert Museum, London; Stedelijk, Amsterdam; Rijksmuseum, Amsterdam; Albertina Museum, Venice; Arts Council of Great Britain; British Council; and numerous provincial British galleries. He was elected RA in 1991 and was made Senior Fellow, Royal College of Art in 2000. Ackroyd lives and works in London. 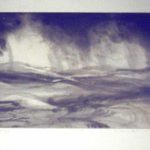 Signed, dated ’00 and numbered 1/XX by the artist in pencil (one of 20 artists’ proofs aside from the standard edition of 100)