Nigel Lambourne was a draughtsman, book illustrator and printmaker. He became well known for his lively etchings, often of the female form and had his first one-man exhibition at the Kensington Art Gallery in 1949 and later at the Zwemmer Galleries. The last solo exhibition of his work was at the Victoria Art Gallery, Bath in 1992. Included with this print is a copy of the catalogue for the 1992 exhibition held in Bath of Lambourne’s work. 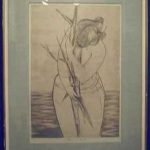 Signed and numbered IV/12 in pencil by the artist