Monica Poole was an English wood engraver. She lived in Kent for the greater part of her life, and according to Anne Stevens “found her subjects, and shapes in the rolling chalk downland, the lush wealden country and the shore line”. She spent the post-war years from 1945 to 1949 at the Central School of Arts and Crafts, London. Here she met Noel Rooke, a noted wood engraver. It was John Farleigh’s course on illustration that revealed and nurtured her talent for wood- engraving. In 1940 she had first seen and been inspired by Farleigh’s illustrations for D.H. Lawrence’s The Man who Died (1935), which led to the idea of studying under him. She later, in 1985, produced a study “The Wood Engravings of John Farleigh”.

Monica Poole followed no trend. Both in her subjects and in the skill with which she engraved them on boxwood, she stood at the head of the wood-engravers of today. None excelled her in her fine cutting or in her technical mastery. She never imitated or followed, she never bent to what might be popular. Fellow wood-engraver Hilary Paynter said that Poole was her “benchmark for excellence”, punctilious in business and uncompromising in her work. She recalled Poole’s integrity, her unique vision and the way in which her prints are instantly recognisable, meticulous and extraordinarily precise.

Poole produced some 36 wood-engravings from 1977 to 1993, which were greatly sought-after by discerning collectors. She had solo exhibitions at the with Duncan Campbell, London in 1989 and 1993 and exhibited regularly with the Royal Society of Painter-Etchers and Engravers, becoming an Associate in 1967 and a full member in 1975. She was also a member of the Society of Wood Engravers and the Art Workers Guild.

Examples of her work are held at the Ashmoleon Museum, Oxford and the Fitzwilliam Museum, Cambridge, the Victoria and Albert Museum, the British Museum, the Scottish National Gallery of Modern Art, Edinburgh, the Boston Public Library and in many other collections. Her close friend and fellow wood-engraver, George Mackley, published a book on her engravings in 1994. She ranks alongside the giants of twentieth century wood engraving. 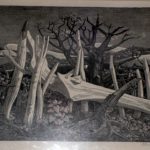 signed, titled and numbered from edition of 100 by the artist in pencil 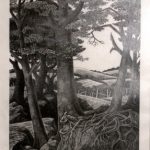 signed, titled and numbered from edition of 150 by the artist in pencil

“Her love of trees is apparent in engravings such as Old Trees, Gully.” (Anne Stevens. Monica Poole: wood engraver, p. 16)

“What Monica Poole says to us about her inner experience of trees will inevitably differ from what is said of other subjects, but it may well be that the subjects have vital elements in common. If, as I have suggested, she likes depth and remoteness, she does convey something of this in her woods… It will be noticed that Monica Poole, when dealing with tree or other textures, selects those that appeal to her as of the greatest relevance and of the greatest emotive significance. These textures are superbly engraved and the problems which she sets herself are solved with great technical brilliance.” (George Mackley. Monica Poole: Wood Engraver, p. 8.)