Painter, maker of reliefs, lithographer and designer. Born 19 March 1908 in London, younger son of Sir William Rothenstein. Studied at the Chelsea Polytechnic and the Central School 1924–7. First one-man exhibition at the Matthiesen Gallery 1938. Worked for the Pilgrim Trust under the ‘Recording Britain’ scheme 1939–41. Decorated schools at Wribbenhall, Bewdley and Eltham. Lived at Great Bardfield, Essex, where he founded his graphic workshop 1954; won first prize in the Giles Bequest Competition for colour woodcuts and linocuts 1954 and 1956. Taught print making at Camberwell School of Art. Art Fellow at Sheffield University 1962. Author of Looking at Paintings 1947 and Linocuts and Woodcuts 1962. 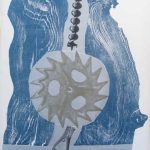 Linocut and woodcut with silkscreen printed in colours

signed in pencil and numbered from edition of 35

‘RIP’ shows a section of a tree trunk, printed in blue ink, split in two by a black drill. For the print, Rothenstein took an impression in blue ink directly from the surface of an elm wood trunk. The edge of the image is the edge of the actual tree trunk. In contrast, the other elements, all man-made, were printed by photomechanical methods reinforcing the idea of the difference between nature and artifice through the printing process itself.

The title of the work pinpoints Rothenstein’s intended meaning, which centres around the idea of the violence perpetrated by man-made industry and technology against the natural world.

The artist’s proof for the edition of ‘RIP I’ won the Gold Medal at the first International Engraving Biennial, Buenos Aires, in 1970.