Martin Leman is well-known for his naïve paintings and representations of cats. Martin Leman was born in London in 1934 and went on to study at Worthing School of Art and later at London’s Central School of Art. He worked as a designer, illustrator and typographer in advertising and publishing for several years before becoming a full-time painter in the 1960s. His work has been exhibited internationally, and he is a regularly included in the Royal Academy Summer Exhibition. His work is held in numerous private collections throughout the world. He is based between London and St. Ives, Cornwall and the distinctive landscape there often serves as a backdrop for many of his paintings. 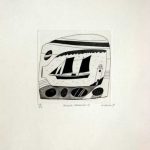 signed, titled, dated and numbered from edition of 40 in pencil