Mark Hearld was born in York where he continues to live and work; he now teaches at York College. Hearld studied illustration at the Glasgow School of Art and at the Royal College of Art, specialising in the illustration of natural history. Animals and plants have remained a constant source of inspiration to him, and are his most popular subjects. He has been greatly influenced by Picasso’s style of spontaneous drawing; increasingly though it is the Englishness of Edward Bawden, Eric Ravilious and John Piper which has absorbed his attention, above all in his lithography and linocuts. 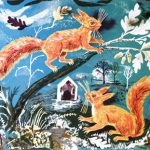 signed and numbered from the edition of 95 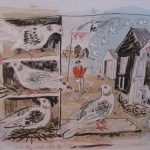