Born in Nizambabad, India on 15 April 1907, Lynton Lamb was raised in London and educated at Kingswood School, Bath. Forced to leave school upon the death of his father, he began work in an estate agent’s office. He continued his studies, however, attending evening classes at Camberwell School of Art and studying life drawing under Randolph Schwabe. Eventually Lamb became a full-time student at the Central School of Arts and Crafts, studying under Noel Rooke, Bernard Meninsky and A S Hartrick from 1928 to 1930. He then became connected with the Euston Road School whilst sharing a studio with Victor Pasmore. The group’s sober scrutiny of society is a clear influence in Lamb’s illustrations.

His artistic career was notably diverse, balancing painting, illustration and other forms of design. He joined the Oxford University Press in 1930, working as a production adviser. Lamb’s design work eventually included book jackets for the World’s Classics series, an illustrated edition of Madame Bovary, the binding of the Coronation Bible in 1953 and numerous other projects. He advanced quickly, teaching Book Production at the Central School from 1935 to 1939. His painting career developed simultaneously, with a solo show at the Storran Gallery, two books on the subject and membership in the London Group. Between 1935 and 1950 he was also involved in the preparation of architectural decorations for the Orient Liners. He served in the Second World War as a camouflage staff officer but continued with the Oxford University Press after the war, working as art editor of the ‘Oxford Illustrated Trollope’. He continued his academic career as well, serving as head of Lithography at both the Slade School of Art and the Royal College of Art and teaching at the Ruskin School in Oxford. Due to his ongoing commercial work, from 1951 to 1953 Lamb was President of the Society of Industrial Artists and Designers.

As an illustrator, Lamb diligently researched his projects and believed firmly in accurate representaion. His illustrations display a wide variety of techniques and media, including pen and ink, wood engraving, and chalk on lithographic stones or zinc plates. He achieved many honours during his lifetime, including election to the Society of Wood Engravers and fellowship of the Society of Industrial Artists and the Royal Society of Arts. In 1974 he was named Royal Designer to Industry. During his later years he lived at Sandon (near Chelmsford, Essex) and suffered several strokes which left him partially paralysed. He died in September 1977. 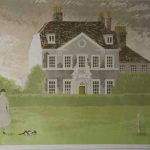 The Artist’s International Association (AIA) co-sponsered this series for the Festival of Britain. School Prints ltd, no: 34.