Lynn Chadwick was born in 1914 in London. He worked as an architectural draughtsman until becoming a pilot during the war. One of the most famous and best-loved British sculptors of the twentieth century, with work held in all major British museums, he sadly died in 2003. 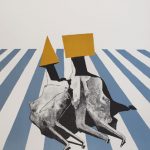 lithograph in colours on wove paper

signed, dated and numbered from the edition of 75 (no. 10) by the artist in pencil 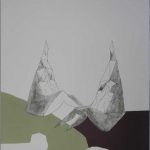 lithograph in green, grey and and plum on BFK Rives paper

signed and dated by the artist in pencil

proof aside from regular edition of 150 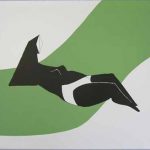 Reclining Figure on a Green Wave

artist’s proof aside from the edition of 200

lithograph in green and black on BFK Rives paper

signed and dated by the artist in pencil

proof aside from the edition of 100

This is a classic lithograph by the artist, showing two abstract figures sitting on stripes. This is a well-known motif for Chadwick, and he used the block and triangular headed figures for large sculptures in the same year. In fact, the motif of seated figures was to dominate Chadwick’s major bronzes during the 1970s. Here, the seated figures are arranged in formal poses close to one another, suggesting apparent intimacy. The female torso and the ‘pleated’ effect of the man’s clothing are both clearly defined and each is turned slightly inwards towards the other, suggesting a closeness and intimacy that contracts with the acid green striped bench upon which both figures are seated. The overall effect of the composition suggests a timeless quality so characteristic of Chadwick’s work.