Leonard Rosoman was born in 1913 and studied at the King Edward VII School of Art, at Durham University, the Royal Academy and the Central School. From 1937 he taught at art schools including Camberwell School of Art, Edinburgh College of Art and the Royal College of Art. He was appointed official war artist to the Admiralty 1943-45. Rosoman became a Royal Academician in 1970 and was awarded the OBE in 1981. In 1988 he executed a cycle of vault paintings for Lambeth Palace Chapel. He has exhibited at the Royal Academy, the Royal Scottish Academy, the Fine Art Society and in New York and Holland. Amongst collections that own his work are the Tate, the Imperial War Museum and the Victoria and Albert. 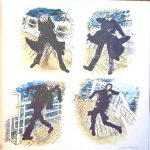 the full sheet printed in colours in fine condition