Painter, printmaker, teacher and writer, born in Dorking, Surrey. Julian Trevelyan was the only son of the poet and scholar R C Trevelyan and the grandson of Sir George Otto Trevelyan, Liberal politician and writer, who was also the nephew of the eminent historian George Macaulay Trevelyan. The young artist began his education at Bedales School, later attending Trinity College, Cambridge, where he read English Literature. It was whilst at Cambridge that he became a member of the Experiments group and became interested in French painting and Surrealism. For several years in the early 1930s he studied with Stanley William Hayter at Atelier 17 in Paris, learning etching alongside Max Ernst, Oskar Kokoschka, Joan Mirò and Picasso. Trevelyan’s early work was experimental, often incorporating everyday objects. In 1936, upon his return to England, he became a confirmed Surrealist, exhibiting at the International Exhibition of Surrealism in London. He was first married to the potter, Ursula Darwin and later to the painter, Mary Fedden. He was a tutor at the Chelsea School of Art, 1950-60, and engraving tutor at the Royal College of Art, 1955-63. In 1986, he was awarded a senior Fellowship of the Royal College of Art and appointed honorary senior RA. His prints, in a variety of styles, retain a dreamlike and fantastic quality. 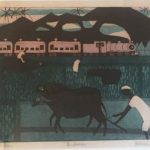 artist’s proof aside from edition of 75 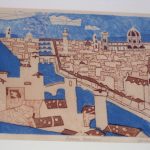 Florence Panorama from the Florence Suite

signed, titled and numbered from the edition of 100

An example of this work is held in the Government Art collection.