The brooding landscape of Ystradgynlais in the Upper Tawe Valley of South Wales forms the subject-matter of this powerful work. Josef Herman moved to this mining community after World War II and lived and worked as an artist there for eleven years. Herman had come to Great Britain as a Polish-Jewish refugee from National Socialism before the Second World War, having first fled to Brussels in 1938. On the invasion of Belgium by Germany, he went to France and from there to the United Kingdom, settling first in Glasgow and then in London.

Herman was thus very much an outsider looking in to the life of this remote community of miners, capturing the hard life that the miners and their families endured, but also acting as an intimate witness to their social lives and rituals in the pubs to which the miners flocked after their shifts ended to quench their coal-dust thirst. This view of Ystradgynlais, captured in muted tones, shows a solitary figure against the shapes of buildings in the town. This figure can be read as Herman’s own alter ego, a man apart from the crowd who walks the streets of this mining community, but does not belong there. He bears witness to a life that is not his. 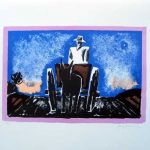 Published by the Curwen Press.

Example in the Tate Gallery £350