English painter and printmaker. John Hoyland trained at the Sheffield College of Art (1951-6) and at the Royal Academy Schools (1956-60). Afterwards he taught at the Croydon School of Art, (1962-3) and at the Chelsea School of Art (1962-70,) where he became principal lecturer in 1965.Under the influence of Nicholas de Staël he began by 1954 to paint Sheffield landscapes and abstractions from still-life subjects. His devotion to colour began with experiments at a Scarborough summer school (1957), where tuition was provided by artists such as Victor Pasmore. His work often focussed on the interaction between colours, later becoming more expansive, where he would often pour paint directly onto the canvas or apply it in thick layers with a palette knife. He has produced a steady flow of prints, exhibited widely and received a number of awards. Exhibitions of his work have been held at the Whitechapel Art Gallery in 1967 and at the Serpentine Gallery in 1979. He was elected an ARA in 1983. 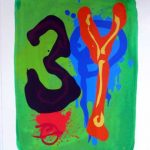 printed by Advanced Graphics, with their blindstamp

signed, dated and numbered from the edition of 300 by the artist in pencil

This print was commissioned by Martin Krajewski – Director of Joslin Rowe Associates to celebrate Christmas 1996.