After working as a joiner from 1944 to 1946, Joe Tilson studied at St Martin’s College of Art from 1949 to 1952 and at the Royal College of Art from 1952 to 1955. After receiving the Royal College of Art’s Rome Prize he went to live in Italy in 1955, returning to teach at St Martin’s School of Art. This was followed by teaching positions in Britain at the Slade School of Fine Art, King’s College and University College, London, and abroad in New York and Hamburg. His first solo exhibitions were held at the Marlborough Gallery, London (1962) and at The Walker Art Gallery in Liverpool (1963), and have been followed by a series of both retrospectives and shows of new work in the United Kingdom and overseas, most notably at the XXXII Venice Biennale and the Royal Academy’s 2002 exhibition `Joe Tilson: Pop to Present’. Tilson lives and works in London and Cortona. 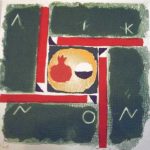 The full sheet printed in colours to the edges