Born in Lancashire into a Jewish family in 1935, the sculptor and print-maker Ivor Abrahams studied sculpture at St. Martin’s School of Art under Anthony Caro from 1952 to 1953 and then undertook further training at Camberwell School of Art under Karel Vogel from 1954 until 1957. Following his studies, he travelled extensively throughout Europe in the late 1950s and returned to England to become a visiting lecturer in Sculpture (Birmingham College of Art and Coventry College of Art 1960-1964). Abrahams has also taught at Goldsmith’s in London, in the Prints Department at the Royal College of Art and at the Slade School of Art.

Abrahams had his first show with Peter Blake at the Portal Gallery in London in 1960 and, during the early part of his career, was grouped with the Pop Artists, a movement that emerged in British art in the 1950s and continued to flourish into the 1960s. Following this early exposure, Abrahams was included in shows at the ICA in London, as well as at the legendary Richard Feigen Gallery in New York. A major museum show, at the Koelnischer Kunstverein, Cologne, followed in 1973 and he has had many solo and group shows worldwide over the last three decades. Abrahams was elected a Royal Academician in 1991 and lives and works in London. 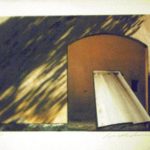 Published by the Royal Academy in 2000. Fine condition.