Henry Cliffe was born in Scarborough, and studied painting and lithography at the Bath Academy of Art, Corsham where he later taught alongside his former mentor, William Scott. His most important work resonates with many of his contemporaries of the 1950s and 60s, whilst having a distinct approach to form, and above all the human figure, that is all his own.

By 1952 Cliffe’s work was being represented in international exhibitions, and he had important one-man exhibitions of paintings at the Redfern Gallery in 1956 and 1961. Further important shows included the Arnolfini Gallery, Bristol in 1962 and 1964; an exhibition of prints and drawings at St George’s Gallery, London in 1959; and a solo exhibition of gouaches and prints at the Centaur Gallery, Bath in 1967. His lithographs were included in the International Biennial of Contemporary Colour Lithography in Cincinnati and the British Pavilion at the Venice Biennale 1954 and 1960.
Henry Cliffe was awarded first purchase prize by the Philadelphia Print Club in 1960 and a Ford Foundation Fellowship by the Pratt Institute of Graphic Art, New York 1961.

His work is represented in many public collections including the Museum of Modern Art, New York; the Victoria and Albert Museum; Cincinnati Art Museum; Bristol City Art Gallery, and the University of Bristol. 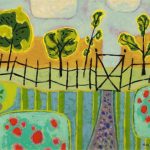 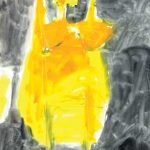 Cliffe came into contact with many of the ‘St Ives School’ artists during his time at Corsham, in particular Peter Lanyon and Roger Hilton. ‘Untitled (Abstract Figure)’ shares with Hilton’s work of the time an abstracting of the body into loosely geometric proportions and a flattening of the figure that makes depth the job of colour and texture. This painting also shows an awareness of contemporary American trends, in particular de Kooning’s abstract expressionist treatments of the female body, that radically distort, placing an emphasis on painterly animation of the surface.