Gwenda Morgan was a wood engraver, who was born and spent most of her life in Petworth, Sussex, an area frequently depicted it in her work.

She attended Goldsmiths’ College of Art until 1929, after that the Grosvenor School of Modern Art under lain Macnab where she learnt to engrave.  Macnab recommended her to Christopher Sandford at the Golden Cockerel Press for whom she illustrated four books. She exhibited at the Royal Academy, Redfern Gallery and Royal Society of Painters- Printmakers which she was a member, but became best known for her books and other illustrations, especially Gray’s Elegy for the Golden Cockerel Press, of 1946, and Grimm’s Other Tales, 1956.

John Randle commented on her work:

“She engraves with conviction and clarity. Her blocks are beautifully clean and deeply cut, the antithesis of the very fine line technique beloved of some engravers which can make the printer’s job such a difficult one.” (Randle, ed: The Wood Engravings of Gwenda Morgan, 1985.)

The Victoria & Albert Museum and Ashmolean Museum, Oxford, hold examples of her work. 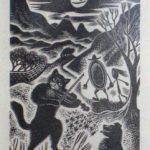 signed titled and numbered from the edition of 50 (18)