Gwen Raverat was the daughter of Sir George Darwin, Professor of Astronomy at Cambridge University and the grand-daughter of Charles Darwin. She studied at the Slade from 1908-1911 and was self-taught as a wood engraver. In 1911 she married Jacques Raverat, a fellow art student. The pair were close friends of Eric Gill, Stanley Spencer and Andre Gide. In 1920 Gwen Raverat became a founder-member of the Society of Wood Engravers and an Associate of the Royal Society of Painter-Etchers and Engravers. Raverat’s role within the revival of wood engraving cannot be underestimated. She published books containing modern wood engravings from 1915 and illustrated a huge quantity of books throughout her life.

Rare artists proofs of wood engravings for Laurence Sterne’s A Sentimenal Journey. Laurence Sterne’s A Sentimental Journey was first published with illustrations by Gwen Raverat in 1938 by Penguin from stereotypes altered by the artist for this publication. It was reissued in 1941, printed and published by Thomas Nelson with original wood engraved illustrations rather than with those with strengthened whites from the 1938 stereotypes. A great deal of definition was lost from these compositions in 1938 when they were printed from stereos, later rectified by Nelson in 1941 who printed directly from Raverat’s own blocks. These fine examples of Gwen Raverat’s engravings, in proof form were designed and engraved by Raverat in 1937 and were eventually used in the 1941 edition of the book.

All on cream Japanese paper, strong impressions, with conservation mounts and black frames. 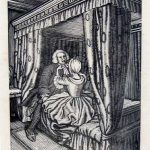 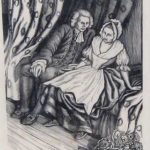 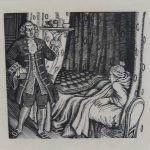 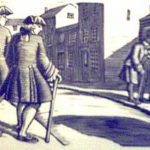