Gillian Ayres is a British artist of international repute. She studied at the Camberwell School of Art, London between 1946 and 1950, where she rejected Euston Road teaching. In 1960 she took part in the Situation exhibition at the RBA Galleries in London but, unlike most of her colleagues, she painted in a free tachist manner inspired in part by photographs of Jackson Pollock working on the floor. Her mature work is firmly abstract in flavour with an instinctive approach to colour. Retrospectives of her work have been held at the Royal Academy and the Serpentine Gallery in London as well as at the Yale Center for British Art in Connecticut. Her work can be found in the permanent collections of the British Museum, The Tate Gallery and the Victoria & Albert Museum, London, and The Museum of Modern Art, New York. 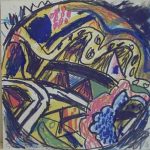 lithograph in colours, signed, numbered 18/48 and dated ’87 by the artist

Published by The Royal College of Art in 1987 in an edition of 48, in fine condition.