Edwin La Dell was born in Rotherham. He studied at Sheffield School of Art, and at the Royal College of Art, London where John Nash was teaching. During World War II he was appointed an official war artist to work on public murals and camouflage. His role in post-war British printmaking is important. He was connected with the influential School Prints, and with the later commissioned series marking the coronation of Queen Elizabeth II. La Dell was also much involved with the St George Gallery and Robert Erskine, trying to promote British printmaking. 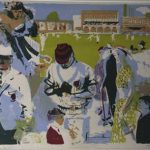