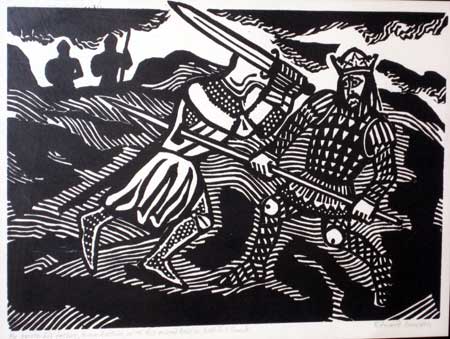 He smote his father, King Arthur with his sword held in both his hands.’ (the Death of King Arthur)

signed and titled by the artist in pencil

unnumbered example aside from the edition of 50, (12 (10 for sale) boxed sets of the prints on Japanese Hosho paper, were also issued though the individual prints were numbered but not signed or titled)

References: MG: 170. This particular image of the death of King Arthur was not used in the folio society edition of the book, but issued separately as a print. 50 examples of the individual prints were issued although Greenwood notes that no more than 15 from the edition were probably printed from the projected edition of 50.

‘Bawden executed seventy-one linocuts for The Chronicles of King Arthur and spares us none of the gory details of mediaeval life. Here we see Bawden at his best with his use of simplified forms, extraordinary silhouettes and exaggerated details. It is typical of Bawden, who throughout his life remained something of an ironic observer and relished the absurd, that he should leave us this highly personal interpretation of Malory’s great work.’ (Quoted in MG: p. 14).