Scottish etcher and painter Sir David Young Cameron was born in Glasgow in 1865. In the early 1880s, he trained at the Glasgow and Edinburgh Schools of Art and was associated with the Glasgow Boys. Cameron became a leader in the Scottish etching revival. He was a member of the Royal Society of Painters-Etchers from 1887- 1892. His first published prints were the Clyde Set, (20 celebrated views of the river Clyde), followed by the London Set and a number of continental sets, including North Holland, North Italian, Paris and Belgium. His prints depict many architectural subjects and landscapes. He produced over 500 etchings and was knighted in 1924 and made the King’s Painter in Scotland in 1933. 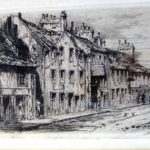 signed and dated in the plate

on wove paper with margins

The present etching was produced by Cameron for the Regality club in Glasgow and issued to its 200 members. The Regality Club was established in 1885 to preserve a record of old buildings and relics within the regality of Glasgow.