Chris Plowman was born in Fareham, Hampshire, in 1952 and attended the Winchester School of Art, Wolverhampton Polytechnic and the Royal College of Art. His postgraduate years at the Royal College were formative ones: he strengthened his understanding of the technical aspects of print-making, particularly focusing on silkscreen and etching, with his close friend Tim Mara, and after he graduated he produced a widely-exhibited series of prints.

Examples of his work are in the Tate Gallery, the Victoria and Albert Museum, and the British Council and New York Public Library collections. In 1987 he won the Henry Moore Foundation prize for sculpture. 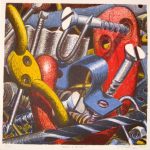 signed, dated, titled and numbered 18/48 by the artist in pencil

Published by the Royal College of Art in 1987 in an edition of 48. Example held in Government Art Collection.