Chris Orr has had a number of solo exhibitions, including the Serpentine Gallery, (1971), the Whitechapel Gallery, London and the Museum of Modern Art, Oxford, (1976). International one-man shows include Galleria Grafica, Tokyo, Japan, in 1980, Jay Street Gallery, New York, USA, in 1983 and Print Guild, Melbourne, Australia in 1987.

Orr was made a fellow of the Royal College of Art in 1985, a Fellow of the Royal Society of Painter Printmakers in 1988 and a Royal Academician in 1995. He lives and works in Buckingham and London. His work is held in a number of public collections, including: Arts Council of Great Britain, British Council, Royal Academy of Arts, Museum of London, Victoria & Albert Museum, Science Museum, The British Museum, Government Art Collection and Tate Gallery. 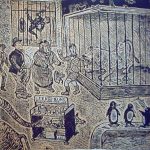 Albert and the Lion

signed, dated and numbered 18/48 by the artist in pencil

the full sheet printed to the edges in fine condition.